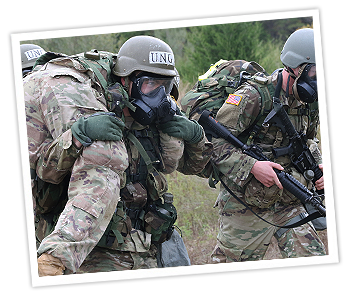 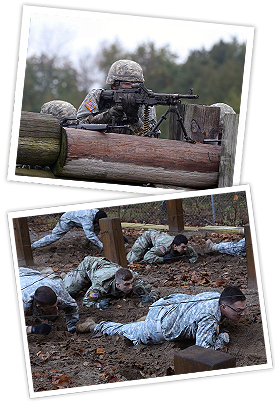 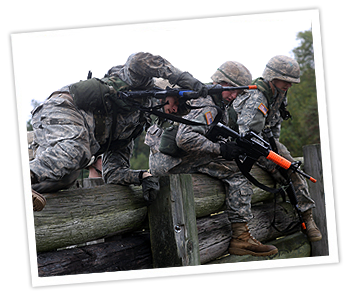 What is the Ranger Challenge?

This competition is conducted over two days on a non-tactical course. The mission is to challenge Cadets' mental and physical toughness and to develop leadership while fostering teamwork and esprit-de-corps. Teams participate in nine graded events.


A typical breakdown of events is as follows:

Written Land Navigation Test
In this event the team must answer various questions on advanced land navigation. Each team is given a 25 question test, the team then has ten minutes to answer as many questions as possible in that time. Each question has a point value commensurate with its difficulty. The team goal is to answer the most difficult questions, correctly, in the time allotted. This test is based on speed and accuracy.

Day Orienteering
In this event the team breaks down into two groups of five and then must find as many points as possible in one hour using only map, compass, and their orienteering skills. Each point has a score relative to its distance from the start point. The team goal is to find as many high score points as possible in the hour given. The entire team must return before time expires or suffer a loss of points. This test not only tests their orienteering skills, but also their ability to work as a team and their physical fitness.

BRM (Basic Rifle Marksmanship)
At the BRM competition, the teams shoot M-16 rifles for score. Each team member is given 9 rounds to zero their M-16. They are then given 40 rounds to shoot an Army alternate qualification target in under 4 minutes. Each hit counts for one point. Team with the highest overall average score wins.

Grenade Assault Course
In this event the team breaks down into five, two man teams. Each team must then negotiate an obstacle course, under fire from two paintball snipers. At specific points the team must throw each of their four simulated grenades at certain targets. Points are awarded for each grenade "hit", points are lost for every paintball hit either team member receives (it is possible to receive negative points in this event). Each team has fifteen minutes to complete the course. While on the course Cadets must use movement techniques such as the High Crawl, Low Crawl, and Back Crawl to successfully complete the course. Points are awarded based on grenade aim.

M-16 Disassembly/Assembly
The M-16 disassembly/assembly is a timed event where each team member must disassemble and then assemble an M-16. The cadets start 50 meters from the M-16, they must run to the weapon, disassemble it and lay out the pieces in a specific manner. Once complete, they must then assemble the weapon, do a sequenced function check, place the weapon down and run back across the start line to stop the clock. Each mistake is assessed a time penalty. The total time for the team to complete this task is used to assess the winner.

Mystery Event
The Mystery Event is exactly that. Each team is taken to a concealed location and given a task that is a mystery until they get there. It changes every year as does its scoring system. The mystery event is just another way to keep Ranger Challenge interesting.

Night Orienteering
The last event of the day, which all teams perform at the same time after dinner, is the Night Orienteering course. This event is similar to the day orienteering course except it is done at night. The team breaks down into two groups of five and then must go find as many points as possible in one hour using only map, compass, and their orienteering skills. Each point has a score relative to its distance from the start point. The team goal is to find as many high score points as possible in the hour given. The entire team must be back before time expires or suffer a loss of points. This test not only tests their orienteering skills, but also their ability to work as a team, ability to navigate at night, and their physical fitness.

Once the team is done with Night Orienteering (usually after midnight) then it is back to the barracks for a good night's rest. First thing in the morning, at 0530, is the Army Physical Fitness Test, or APFT.

APFT
The APFT consists of two minutes of pushups, two minutes of sit-ups, and a two mile run. Scoring is based on Army standards. Every team member must score at least 70 points in each of the three events or that Cadet will receive an overall score of 0 (out of a possible 300+). Every member of teams' score is added together for the overall team score; team with the highest score wins. There are also individual awards (the only individual awards of Ranger Challenge) for the best male and female score in each event and for best total score, male and female.