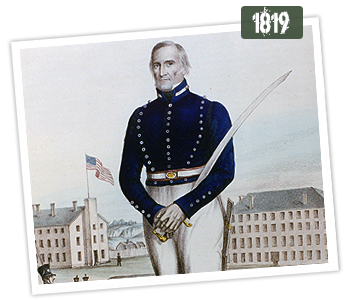 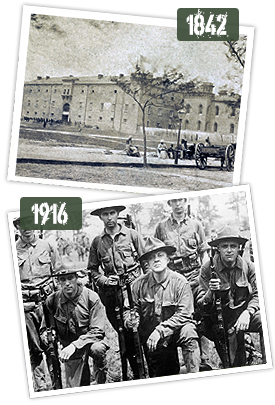 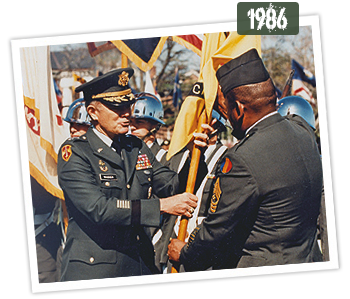 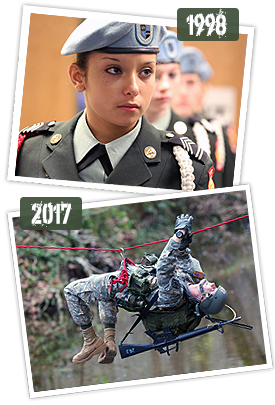 Making the best military officers in the world.

Army ROTC is the largest officer-producing organization with the American military, having over 600,000 men and women have earned a commission through the program. Among them are two chairmen of the Joint Chiefs of Staff, seven Army chiefs of staff, two Cabinet secretaries and a sitting Supreme Court associate justice. Few other military commissioning sources can claim such significant lineage.

Throughout the last hundred years, the U.S. and its Army faced numerous challenges both at home and abroad. Wars against despotic foreign governments were fought and won; economic depressions endured; medical, scientific and technological advances were made; and U.S.-led peacekeeping operations contributed to greater global stability.

By Brigadier General Sean A. Gainey**

Click the video to begin play, you can click to make
the video fullscreen after launch.
The ROTC story really begins in 1819 with Capt. Alden Partridge, a former superintendent of the U.S. Military Academy at West Point, N.Y. Capitalizing on his experience, Partridge established the American Literary, Scientific and Military Academy in Norwich, Vt. It was there that Partridge's method of producing "citizen-soldiers" first took root. The institution, now known as Norwich University, continues operating to this day.

Partridge advocated a process through which able-bodied men would receive military training while attending civilian institutions of higher learning. The benefits to the nation would be multifold. A cohort of trained military leaders would be available on short notice whenever the need arose. But when circumstances did not require their service in uniform, they would be free to pursue civilian occupations. The merits of Partridge's approach soon became evident, and a number of other American academic institutions began to operate along the lines he advocated.

Between 1819 and 1861, several other schools focusing on military instruction were established. These included Lafayette College, Pa.; Oak Ridge Military Academy, N.C.; Kemper Military School and College, Mo.; and Marion Military Institute, Ala. By 1840, Indiana University and the University of Tennessee had added compulsory military training as well. The state-supported Virginia Military Institute and The Citadel, S.C., also commenced operations during this period.

The Land Grant Act of 1862, championed by Vermont legislator Justin Morrill, represented the next milestone in ROTC's history. Under its terms, each state received 30,000 acres of public land to establish institutions of scientific learning. In return, these land grant colleges were to offer military tactics courses. Graduates of these institutions, along with those trained on other campuses, would ultimately fight in both the Union and Confederate armies.

The Confederacy's surrender in 1865 did not mark the end of efforts to incorporate military instruction on college campuses across the growing nation. A total of 105 colleges and universities across the country were offering military training by the early 1900s.

The next key development in ROTC's history became known as the Plattsburg Movement, named for the camp in upstate New York that was established to train civilian volunteers on military preparedness. As fierce fighting raged between the Central Powers and the Allies, a group of prominent Americans formed this preparedness program. These pro-Allied community leaders believed our Army was too small to be effective if America was drawn into World War I. In the summers of 1915 and 1916, they facilitated the establishment of additional camps to train potential Army officers. By the end of 1917, more than 17,000 men had trained at these camps.

Isolationism and the resulting smaller standing Army did not produce a favorable environment for ROTC in the wake of World War I. During these lean years, Army ROTC efforts focused on producing officers for the Army Reserve. When war came in 1941, these ROTC graduates made an immediate positive impact. Army Chief of Staff Gen. George C. Marshall Jr., himself a Virginia Military Institute graduate, wrote, "Just what we would have done in the first phases of our mobilization without [ROTC graduates] I do not know. ... The cessation of hostilities on the European front would have been delayed accordingly."

By 1947, America had rapidly demobilized with the surrender of Nazi Germany and the Imperial Japanese government. But Soviet aggression and an armed conflict in Korea quickly spurred renewed interest in ROTC. The ROTC Vitalization Act of 1964 solidified ROTC's role as the primary source of active-duty Army officers, and the program of instruction for Army ROTC became more closely aligned with a college education than ever before. Scholarships were made available to qualified cadets, and monthly stipends were offered. All of these factors were expected to broaden the popularity of the program on campus.

Challenges to the requirement that all male students at land grant institutions enroll in ROTC surfaced at virtually the same time. The national debate on U.S. involvement in Vietnam also contributed to an uncertain future for ROTC. Young men had faced compulsory military service throughout the Cold War years. Deferments granted to students enrolled in college-level ROTC increased the attraction of the program. That situation was altered when Congress initiated a draft lottery system that did not feature draft deferments to ROTC cadets.

The draft ended in 1973 and as might be expected, total ROTC enrollment declined significantly. But under a pilot program, women became eligible to enroll in Army ROTC in the 1972–73 school year. The pilot program proved successful and in short order, the program was commissioning female lieutenants.

Each subsequent commander has built on Wagner's success. Since the onset of the global war on terrorism, the quality of ROTC-trained officers has won high praise. In a 2002 speech at Virginia Military Institute, President George W. Bush said ROTC cadets "represent the best of our country, and the best future for the United States Army."

He added, "For nearly 90 years, this great program has developed leaders and shaped character. Those looking for idealism on the college campuses of America will find it in the men and women of ROTC. ROTC's traditions and values are a contribution and a credit to every college and every university where they're found."

In those same remarks, Bush highlighted retired Gen. Colin L. Powell, a graduate of the City College of New York Army ROTC program, who was then serving as U.S. secretary of state. Bush shared with the audience Powell's personal reflection on his time in ROTC. Those thoughts speak volumes about the lasting benefits of ROTC.

Click the video to begin play, you can click to make
the video fullscreen after launch.
Powell said, "The order, the self-discipline, the pride that had been instilled in me by ROTC prepared me well for my Army career or, for that matter, any career I might have chosen." Powell's affinity for ROTC also extended to the high school Junior ROTC program. He was the driving force behind its major expansion during his tenure as chairman of the Joint Chiefs of Staff.

Cadet Command has continued refining its training methodologies and the leader development process in recent years. In 2014, all collective ROTC summer training was consolidated at Fort Knox. In a departure from the past, new hands-on training opportunities are now available to all cadets. Graduates must be prepared to operate in every corner of the globe, so cultural awareness training became a priority. Overseas immersions help prepare ROTC graduates in ways the classroom cannot.

These opportunities expose cadets to everyday life in different cultures and also intensify language study. Armed with these experiences, today's ROTC cadets are well-prepared to assume the reins of small-unit leadership from the onset of their service to the nation.

Army Chief of Staff Gen. Mark A. Milley earned his commission through the Army ROTC program at Princeton University in 1980. In recent remarks at his alma mater, he noted America's Army is powerful because it protects the most powerful idea that ever existed in world history.

As we mark the centennial of our program, the Army ROTC community renews its pledge to remain at the vanguard of that effort.

Brigadier General Sean A. Gainey was the Deputy Commanding General of the U.S. Army Cadet Command between 2016-2017. He has led at the platoon, company, battalion and brigade levels, and deployed in support of Operation Iraqi Freedom and Operation Enduring Freedom. He holds a bachelor's degree from Georgia Southern University, and master's degrees from Central Michigan University and the National Defense University's Dwight D. Eisenhower School for National Security, Washington, D.C.