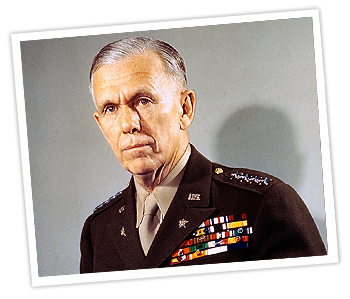 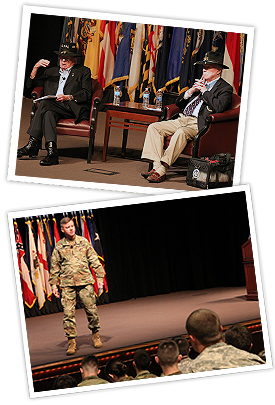 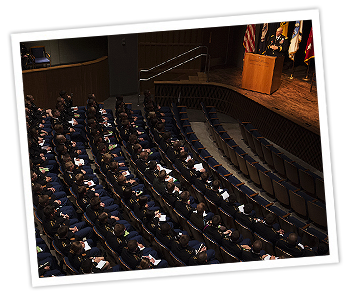 Those selected to attend the 2018 US Army Cadet Command George C. Marshall (GCM) Awards & Leadership Seminar are walking in the footsteps of one of America's preeminent Citizen-Soldiers. The nation's top Army ROTC Cadets have been attending the George C. Marshall Award Seminars since 1978. The seminar was originally held in Lexington, Virginia because Virginia Military Institute was the alma mater of General George C. Marshall, who as Army Chief of Staff, grew the U.S. armed services from about 170,000 to more than eight million Americans in uniform by the end of World War II. After the war, as Secretary of State, Marshall formulated and successfully enacted the massive project to rebuild Western Europe - now known as the Marshall Plan.

Two hundred seventy-five of the top Army Reserve Officers' Training Corps (ROTC) Cadets, representing colleges and universities from across the nation, will gather at Fort Leavenworth, Kansas, for the 39th annual George C. Marshall Leadership & Awards Seminar February 11th-14th. Throughout the seminar, the Cadets will take part in seminars and round table discussions with Army and Defense experts on critical defense and geopolitical matters, and the profession of arms. The exposure to contemporary civilian and military leaders at a high level provides these Cadets unique opportunities they have not received during their college ROTC curriculum.

The Cadets are nominated from their respective programs based on scholarship, leadership, physical fitness and community involvement and are designated George C. Marshall Award recipients for their respective year. They are college seniors and most of them hold senior leadership positions within their Army ROTC detachments. For the last several years, many of the Award winners have a great deal of prior service, some in combat theaters.


Who was George C. Marshall?

George Catlett Marshall was one of the great American statesmen of the century. He played a crucial role in international affairs from 1939 to 1951 -- the years that shaped the second half of the century. Until 1945, he was in the military service of the United States. As Chief of Staff of the U.S. Army from 1939 to 1945 he was, in the words of Winston Churchill, the "true architect of victory" in the West European arena of World War II. Marshall was born on December 31, 1880, in Uniontown, Pennsylvania. He graduated from the Virginia Military Institute in 1901; afterwards, he was commissioned a Second Lieutenant. On September 1, 1939, he was promoted to Chief of Staff with the rank of General. Marshall was named General of the Army on December 16, 1944.

In a succession of positions of great responsibility between 1945 and 1951, Marshall devoted his efforts to the cause of international peace and security. He spent a year in China in 1945-46 as President Truman's representative, attempting -- without success -- to bring about a peaceful resolution to the conflict between the nationalists and the communists. As Secretary of State from 1947 to 1949, he developed an economic program, the Marshall Plan, that turned the tide of Communism in war-ravaged Western Europe.

As Europeans endured unemployment, dislocation, and starvation in the wake of World War II's devastation, the Marshall Plan embodied Marshall's conviction that economic recovery and stability were vital underpinnings to the successful rebuilding of a democratic Europe. Marshall's belief that America's security and continued economic growth were inextricably linked to Europe's well-being, which formed the cornerstone of his Plan. With the assistance of the Marshall Plan, Western Europe began to recover from the ravages of war. Marshall's effort to include the Soviet Union and Eastern Europe in this grand design was rejected by Moscow. As Western Europe rebuilt, Europe was divided both economically and ideologically, and conflicting politics soon laid the ground for another war -- The Cold War.

When it became evident that the gap between Eastern and Western Europe would not be bridged, and that the Western European states feared for their safety, Marshall was one of the leaders who created the North Atlantic Treaty Organization which would ensure the security of the West. The establishment of NATO in 1949 achieved a balance of power in Europe that endured until the end of the Cold War.

In the last official position as Secretary of Defense during 1950-51, Marshall oversaw the formation of an international force, under the United Nations, that turned back the North Korean invasion of South Korea. Although he spent most of his life in the U.S. military, Marshall is best remembered as a true internationalist who sought peace for the world through cooperation and understanding among nations. It was a fitting tribute to a splendid career spent pursuing this ideal that Marshall received the Nobel Prize for Peace in 1953.