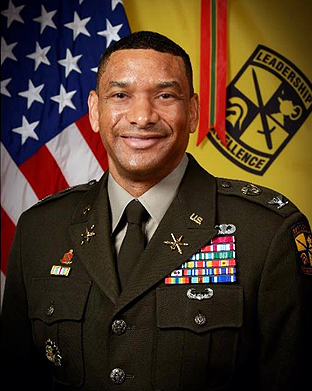 Select below for a printable copy of the Colonel's official biography.

Colonel Maurice O. Barnett is the Deputy Commanding Officer for the United States Army Cadet Command. Prior to assuming his current position, Colonel Barnett served as the Executive Officer to the Director of the Army at Headquarters, Department of the Army, Washington, D.C.

Colonel Barnett, a native of Gary, Indiana, received his commission as a Second Lieutenant in the Air Defense Artillery Corps upon graduation from Indiana University in 1994. He is also a graduate of the Air Defense Officer Basic and Advanced Courses, Combined Arms Services Staff School, Command and General Staff College, and Marine Corps War College. He holds a Master of Strategic Studies from the Marine Corps War College and a Master of Science degree in Kinesiology from Indiana University.

Colonel Barnett has held a variety of leadership and staff positions throughout his career. His initial assignment was with the 4th Infantry Division, Fort Hood, Texas, where from 1995 to 1998 he served as a Stinger Platoon Leader, Battery Executive Officer, and Battalion Logistics Officer in the 1st Battalion, 44th Air Defense Artillery. From 1999 to 2001, while at Fort Drum, New York, Colonel Barnett served as Assistant Operations Officer and Charlie Battery Commander, 3rd Battalion, 62nd Air Defense Artillery. Following battery command, Colonel Barnett participated in the Army's Advanced Civil Schooling Program and attended Indiana University. Upon completion of his studies in Indiana, he assumed duty as an instructor in the Department of Physical Education at the United States Military Academy, West Point, New York.

In the summer of 2007, Colonel Barnett moved to Heidelberg, Germany, and subsequently deployed in support of Operation Enduring Freedom, where he served as the Training Officer for the counter-improvised explosive device task force, Joint Task Force Paladin. Colonel Barnett completed two key and developmental assignments while stationed in Germany. He served as the Operations and Executive Officer for the 5th Battalion, 7th Air Defense Artillery, in Kaiserslautern, Germany. From 2010 to 2012, he served as the Senior Air and Missile Defense Analyst and Branch Chief for the Middle East and North Africa Office, Defense Intelligence Agency.