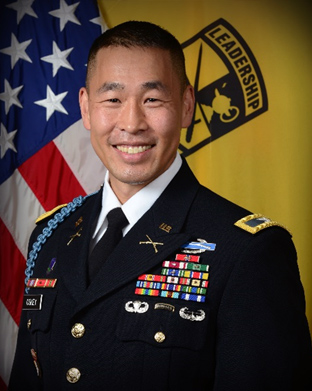 Select below for a printable copy of the Colonel's official biography.

Colonel Lance D. Oskey is from Pittsburgh, Pennsylvania. He completed Combat Engineer OSUT in 1989 and served through the rank of Specialist in the Army Reserves with the 157th Infantry Brigade while attending college. Colonel Oskey was designated a Distinguished Military Graduate and commissioned as a Second Lieutenant in 1993 from California University of Pennsylvania. His initial assignment was with 1-327th Infantry Regiment, 101st ABN DIV (AA) where he served as a Rifle Platoon Leader, Rifle Company Executive Officer, Battalion Adjutant, and Scout Platoon Leader.

Upon completion of the Infantry Officers Advanced Course in 1997, he served with 1-503rd Infantry Regiment at Camp Casey, Korea where he commanded a rifle company, Headquarters and Headquarters company, and served as the aide to camp to the commanding general of 2ID.

He was next stationed at Fort Benning as an Infantry Captains Career Course Small Group Instructor. Following the Command and General Staff College in 2004, he served in multiple positions with the 1stBrigade, 25th ID during the brigade's deployment to Mosul Iraq in support of Operation Iraqi Freedom 3 to include executive officer for 3-21st Infantry Regiment (Stryker). He remained with the brigade as it reflagged to the Second Stryker Cavalry Regiment and re-stationed from Fort Lewis to Vilseck Germany, serving as the Second Squadron S3. He then deployed with the First Armored Division as the deputy effects coordinator during the divisions fifteen month tenure as MND-N in Tikrit, Iraq.

Colonel Oskey next served as the Chief of Training for the Department of Military Instruction at West Point. From May 2010 through June 2012, Colonel Oskey commanded the 2nd Battalion, 54th Infantry Regiment at Fort Benning, GA, which conducted Infantry One Station Unit Training.

In addition to his BA in Business Finance, Colonel Oskey has a Master's Degree in International Relations from Troy State, and a Master's Degree in Strategic Studies from the Army War College. His awards and decorations include the Legion of Merit, Bronze Star Service Medal (2 OLC), Combat Infantryman's Badge, Expert Infantryman's Badge and Ranger Tab.