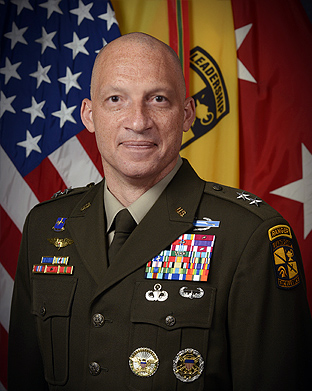 Select below for a printable copy of the Major General's official biography.

He began his career with the 24th Infantry Division at Fort Stewart, Georgia. After the Maneuver Captain's Career Course, he served with the 82nd Airborne Division at Fort Bragg, North Carolina, as a Company Commander and Aide-de-Camp. After Fort Bragg, Major General Davis was assigned to Fort Myer, Virginia, as the Commander of Delta Company, 3rd U.S. Infantry Regiment, "The Old Guard." After attending the Command and General Staff College, Major General Davis was assigned to the 101st Airborne Division at Fort Campbell, Kentucky, where he served as the Battalion and Brigade Operations Officer and Brigade Executive Officer. He then served as the Aide to the Vice Chairman of the Joint Chiefs of Staff and Joint Staff J8 Capabilities Officer. Major General Davis returned to Fort Campbell to command 1st Battalion, 502nd Infantry Regiment and deployed to Afghanistan – Operation Enduring Freedom 10 as a Task Force Commander from 2010 to 2011.